Get more from workplace personality profiling with Facet5 families

Personality profiling is a powerful tool for the workplace. It helps people become both self-aware and aware of how others around them think, feel and act. It offers a universal language that helps people understand each other, allowing for a more cohesive and effective unit to develop.

Facet5 is one of the most modern and advanced measures of personality available today and was designed specifically for the workplace. It measures individuals on five factors, or ‘facets’, based on the scientifically recognised Big 5 theory of personality.

Each individual has a certain amount of each of the following factors, and it is this pattern of scores which gives the overall picture of their personality.

While the depth of Facet5 gives people a detailed and granular understanding of their natural behavioural preferences, it’s a lot to carry around. Although people can talk about being low Will, high Energy, or high Emotionality, and how that relates to others they’re working with that might be similar or different, it’s harder to communicate the bigger picture of their personality.

This is where Facet5 families come in.

Facet5 families give people something to easily identify with

With Facet5, there are 1,000,000 possible combinations of scores that would give noticeably different profiles. But people like to be able to identify with something and to easily spot how they are similar and different to others around them.

This is why Facet5 breaks the large number of possible combinations of scores down into 17 ’families’ of similar profiles.

Like the easy to remember types offered by MBTI (e.g. INFJ, ESTP), Facet5 families give people something to easily identify with and carry around with them, as well as a quick reference point for understanding similarities and differences when working with others.

A spotlight on the 17 Facet5 families

Each family is given a name that is relatable and easy to understand. It’s easier for people to identify with being a Supporter, a Controller, or an Explorer, than it is a four-letter acronym, as per MBTI for example. The names also make it easier for others to quickly understand the style of their manager or a colleague if they know which family they belong to.

The 17 Facet5 families are:

The Family Portrait: a personality summary

Included within each individual's Facet5 report is a ‘Family Portrait’ which details the family they are a closest match to. Individuals are shown their own profile as well as a faint profile which is the reference profile for their closest family.

The Family Portrait gives an overview of the individual through a number of lenses. As well as giving a broad summary of the individual, it describes the contribution they would make to a team, their strengths as a leader and what their manager needs to do to help them be more effective. It also includes a summary of the types of roles they are most likely to be motivated by.

This way, the Family Portrait is more than just a description of behavioural traits. It provides actionable insights about how they work in a team, how they lead, and what motivates and engages them. 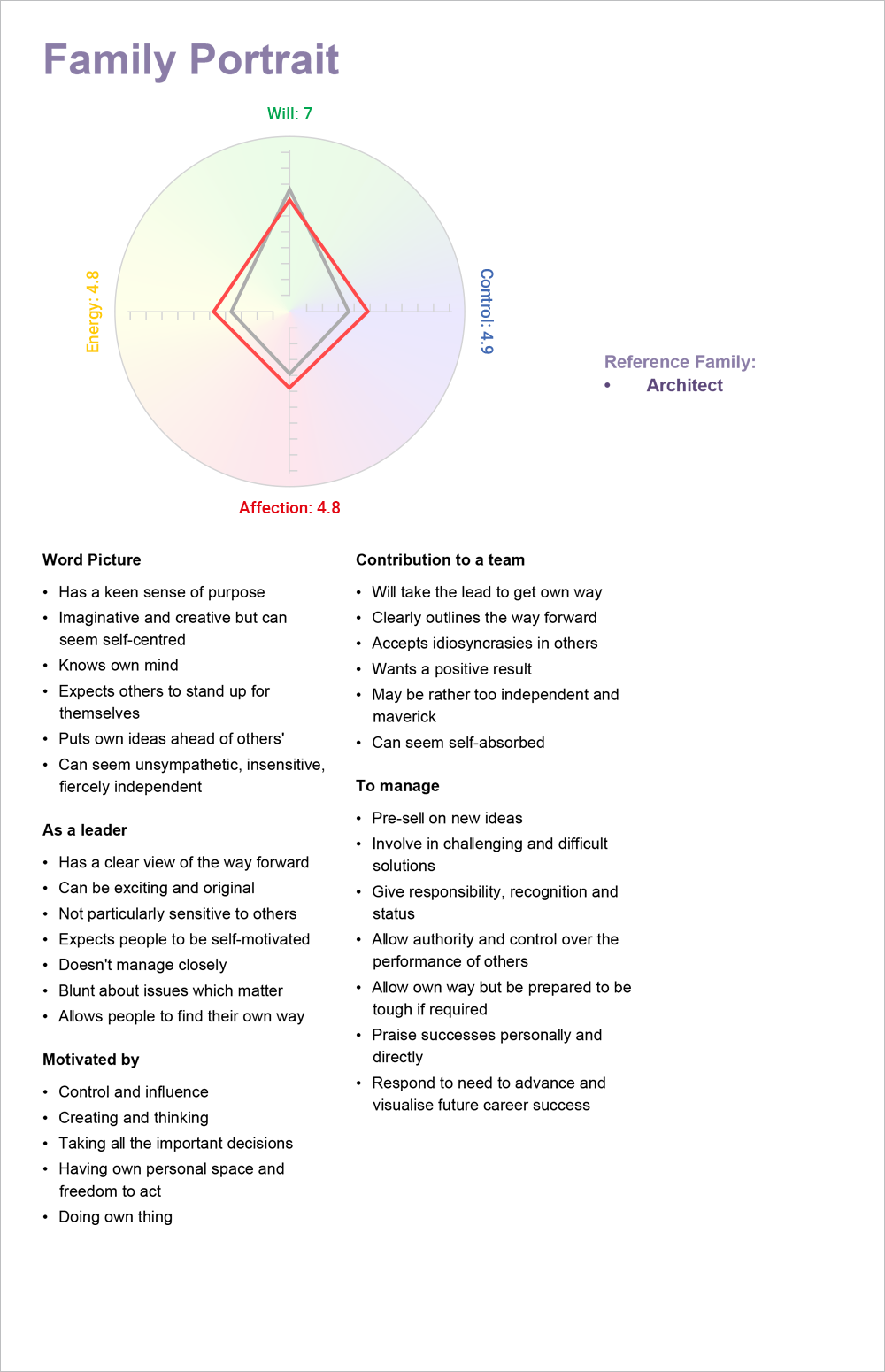 The effect of Emotionality

Given high Emotionality can amplify natural behaviours, for individuals who do score high on Emotionality, the Family Portrait adds an additional insight into the effect it can have on their characteristics.

Here’s an example of the Family Portrait of a Supporter with high Emotionality:

As well as giving people something to relate to on an individual level, the Family Portraits can be combined to give an overview of all the different personalities within a team. This can be useful for seeing how people might interact and work together, as well as any gaps that might affect performance.

In the example below, we can see that as well as Generalists, there is a large proportion of Developers and Entrepreneurs. While Entrepreneurs are low on Affection and strong on Will, Developers are the opposite, and as such we can quickly identify where tensions - or advantages - could arise. 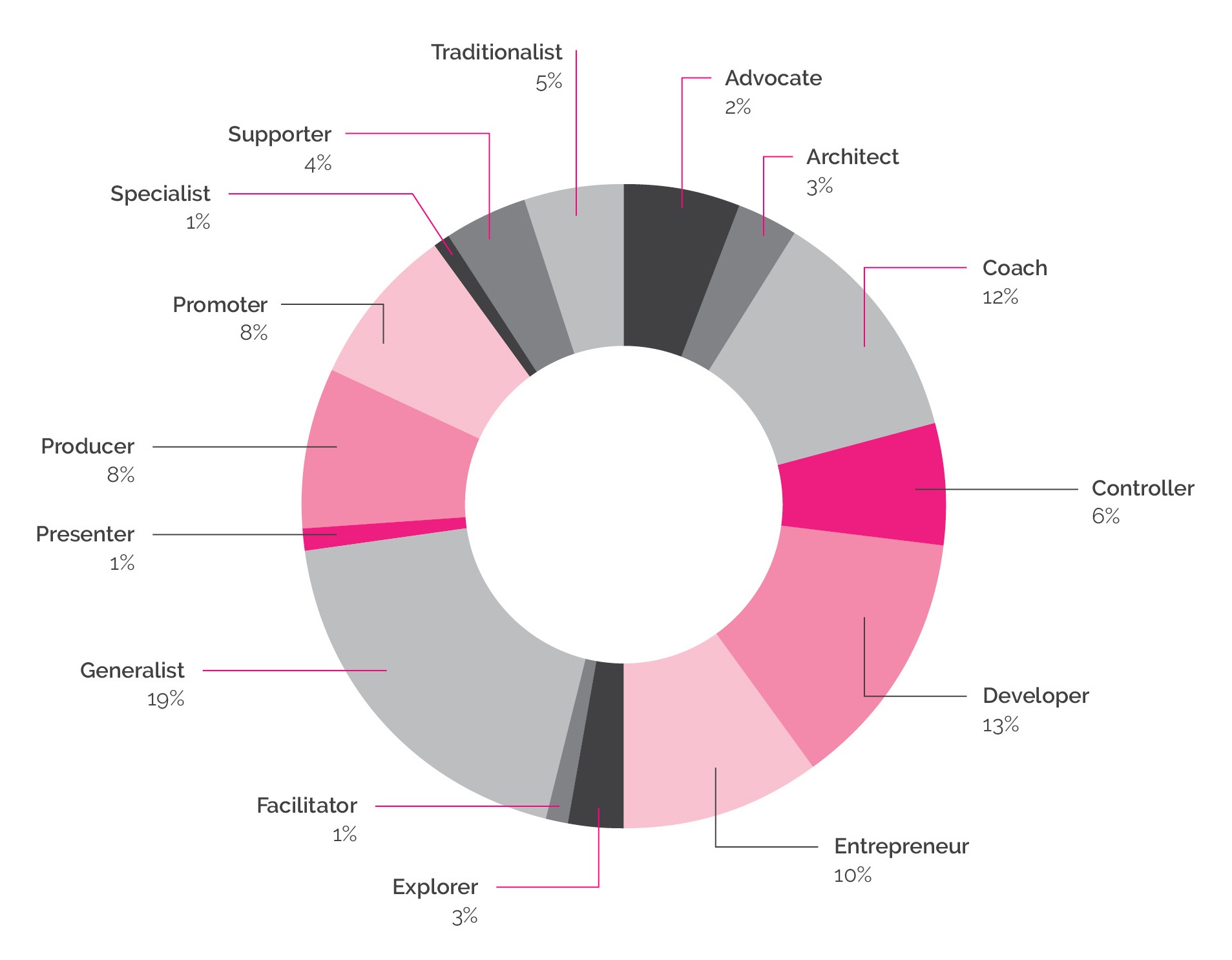 The Facet5 families give people something to identify with and carry around with them and a reference point for understanding others, while not taking away from the depth of insight the full Facet5 profile provides. Combining the families of a team can also provide valuable insights into how a team is likely to work together and any gaps that might affect performance.

In the organisations we've worked with using Facet5, people talk about being high Will or low Energy, as well as being an Explorer, a Supporter, or an Advocate. One of the greatest advantages of Facet5 over other personality profiling tools is that it uses simple, everyday language that everyone can relate to and understand. This helps solidify Facet5 into an organisation's universal language and accelerate the team bonding process.