What does it mean to protect innovation in your organisation?

In this final blog of three from innovation expert Matt Follows, we ask what it means to protect innovation in your organisation.

Being a protector is all about keeping someone or something safe from harm. It’s a powerful word that comes with a weighty responsibility.

In films, the protector is often the hero. Liam Neeson’s character in Taken will stop at nothing to protect his daughter. And getting shot multiple times doesn’t stop Denzel Washington’s character from protecting a young girl in his care in Man on Fire.

But the protectors aren’t always the heroes with the biggest guns and “a very particular set of skills”. The hero isn’t always the soldier. Sometimes it’s the warrior who stays behind to protect the town and protect the people by keeping the peace.

Sometimes, being the protector is about being the guide, the supporter, who quietly pushes people outside of their comfort zone and equips them with the confidence to go further than they ever have before.

The protector is the manager who gives people the freedom and the confidence to fail in pursuit of breakthrough thinking. Who consistently demonstrates that creativity and innovation is not just acceptable, but highly regarded, wholly respected, and actively measured.

So how can you protect innovation in your organisation?

If you shoot down people’s ideas, you’ll put bullet holes through their confidence.

Instead of knocking people down when their ideas are stomped on by a client, you’ve got to stand up for them.

You’ve got to protect people’s ideas. These are their babies. So don’t join in the heckling. Stand by them. Make them feel safe. And show them they won’t be tossed to the curb.

If people haven’t messed up, are they really trying hard enough? Are they really stretching themselves? Because there is no innovation without failure. There should be a whole heap of casualties.

So make screwing up measurable. Add a score to your annual appraisals and 360 reviews of how many times people screwed up. Not so you can line up the biggest offenders and fire them. But to praise them for pushing the boundaries and refusing to polish the status quo.

In the open plan office, everyone can see each other. Everyone knows what everyone else is up to just from a quick scan of the room.

Or do they? Because we just assume that if people don’t look busy, they aren’t busy. But you can’t see the mice running around inside someone’s skull. You go over just as they are about to reach that light bulb moment, and in a nano-second you shatter their flow.

So how can you protect people from their ideas being blown to smithereens by the slightest interruption? Years ago when people had their own offices this would be as simple as just shutting the door.

But in the open plan workplace, you need a new solution. You need to give people a quiet, private space to go where they know they won’t be distracted. Or at the very least, give them a flagpole for their desk that signals, “Don’t disturb me I’m busy!”

If you want people to be more creative and innovative, then you need to start jamming their brains full of interesting things. Get them to listen to more podcasts, watch more videos, and research things that are outside of their sphere of influence and expertise.

But you need systems in place to support all this. If your team are still struggling along on Office 96 and battling a sluggish internet connection, you’ll put out the fire in their imagination.

How well are you protecting your team?

So how do you measure up?

Are you punishing people for getting things wrong? Are you failing to stick up for people’s ideas in fear of upsetting a client?

Are you still praising people for getting things right first time? And ignoring all the steps it took to get there?

Are you asking people to think creatively in crowded and noisy spaces?

And are you stalling their imagination by not having the systems in place that will allow their brains to start firing?

It’s time to take your leap of faith

If you want to respect, expect and protect people’s ability to innovate, you need to embed it into your way of being, into your company DNA and your culture.

It all comes back to your moral inventory. Be honest with yourself. Where are you messing up? What are you doing as a manager, as an organisation, that’s suppressing innovation and breakthrough thinking?

Typically, as companies grow, everything becomes centred around damage limitation. What can we do to mitigate risk? How can we limit the damage when something goes wrong?

But mitigating risk and limiting damage is what made giants like Blockbuster, Nokia, Toys R Us and Thomas Cook fall.

The old adage that if we keep doing what we’ve always done then we’ll be safe is redundant, particularly in this new, uncertain and turbulent world.

Today, standing still and doing nothing is the most damaging thing of all. As managers, we need to flip what we’ve always been taught on its head, and encourage risk taking. We need to give people the freedom to experiment; the inspiration, guidance and permission to be more innovative; and to prove to them how highly it’s regarded by providing a shield against mediocre thinking.

Matt Follows at Leading Left is on a mission to pressure proof brains, declutter minds and eliminate the bullshit that castrates creativity. Fusing 20 years experience in the creative industry with extensive training in psychology and psychotherapy, Matt created the REP Plan to help leaders empower people to think differently, embed innovation into their company’s DNA, and future-proof their business. 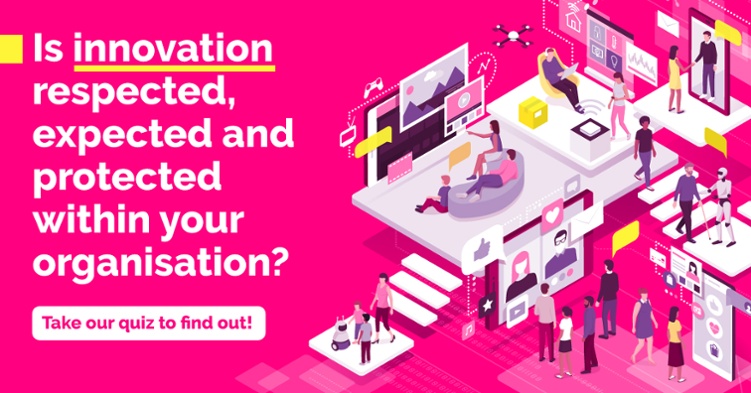