The Neuroscience of Habits Part Two

This blog is part two of a two part series written by Dr. Kenneth Nowack.

This is the second in a two part series written by Dr. Ken Nowack. If you haven't yet read part one, you can do so here.

Facts and Hacks About Goal Striving: “The Way”

Motivation to set goals (i.e., intentions) are actually poor predictors of actual goal success and long-term habit change. However, motivation gets you started, but habits keeps you going. So, lets look at five neuroscience facts and “hacks” that ensure goal planning and long-term success using the default mode brain network associated with self-reflection, emotional control, learning/memory, identifying emotions in others and the parasympathetic relaxation response (“The Way”). 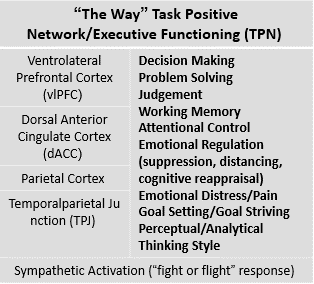 Think about a personal or professional goal you have set in the past but maybe were not successful in “sticking with it” or didn’t really have a specific plan. Here are 3 “hacks” to translate goal intentions into actual practice leading to new behaviours becoming habits.

Hack #1: Use Time and Situational “Triggers” to Increase Goal Success

Goal intentions are unlikely to result in successful behaviour change. In fact, some approaches to goal setting such as using SMART goals aren’t very smart. Instead, use “if/then” implementation plans that have been shown to double a person’s likelihood of achieving goal success.

“If/Then” goals have two components.  The first, the “If”,  is a situation, time or trigger (e.g., a weekly staff meeting, a specific time of the day) that cues up a behaviour you want to practice. The “Then” is a statement of the specific behaviour you want to implement (e.g., doing something more, less or differently). So, instead of creating an goal intention such as “I want to be a better active listener” translate this into an implementation intention using and “If/Then” approach (e.g., If  am leading my weekly team meeting, then will solicit input from other team members and summarise what I hear before sharing my point of view.”)

In general it takes approximately 6 to 8 repetitions of a new behaviour close together in time to begin neuro wiring. More importantly, for complex behaviours to become automatic we need an average of 65 to 91 days of deliberate practice to enhance these newly formed rituals to become habits.

Build in adequate “nudges” (reminders) to keep the goal visible and utilize the full range of rewards and social support to ensure continuous practice to facilitate neuroplasticity and habit formation.  Tracking and monitoring progress also helps to reinforce the desired behaviour and provides a metric of success motivating us to continue with our goals even when we hit those inevitable bumps in the road that might lead to a lapse or full-blown relapse.

For both learning and performance based goals, lifestyle habits can either facilitate or interfere with goal success.  For example, it is known that physical activity increases a brain fertilizer (BDNF; brain derived neurotrophic factor) that enhances memory and learning and exercise after learning (some research suggests it is optimized four hours after working out). Additionally, lack of sleep not only interferes with performance on new tasks, but is  equivalent to being legally drunk in most countries.

Taxi drivers in London have to learn a vast amount of information and have greater grey matter volume in areas of their brain compared to bus drivers or casual drivers. Additionally, the number of years of navigation increase with more experience.  However, it appears that structural brain changes are reversed in retired taxi drivers (full-time taxi drivers had significantly greater grey matter volume in the posterior hippocampus than retired taxi drivers). This study provides at least some evidence that indeed, when we stop practising and using our skills, structural brain changes can follow.

Use goal mentors  and support networks to get over lapses that could lead to full blown relapses in goal completion.  Utilize short-term rewards to increase adherence and develop a relapse prevention plan to deal with inevitable failure from time to time.   By adopting one or more of the “hacks” associated the two different neural pathways associated with motivated goal setting (the “Will”) and planning/execution (the “Way”) we are more likely to shift from goal setting to goal flourishing.  It is often said that “only wet babies like change” but by following some neuroscience principles we can increase our likelihood for successful long-term behaviour change in both ourselves and others we might be coaching or supervising.

Kenneth M. Nowack, Ph.D. is a licensed psychologist and co-founder of Envisia Learning. Ken received his doctorate degree in Counseling Psychology from the University of California, Los Angeles and has published extensively in the areas of 360-degree feedback, assessment, health psychology, and behavioural medicine. Ken serves on Daniel Goleman’s Consortium for Research on Emotional Intelligence in Organizations and serves as Editor-in-Chief for the Consulting Psychology Journal: Practice & Research and is a Fellow of the American Psychological Association (Division 13; Society of Consulting Psychology).