Navigating emotions on the change rollercoaster

Whether in work or life, a good plan – a clear idea of what you are going to do and how you will go about doing it, even in the face of bigger unknowns – can instil a sense of confidence about the task at hand.

Luckily I found a driving partner who is far friendlier with the idea of planning ahead than is my natural preference, and it was with her focused attention we had a practical plan encompassing the preferred route, stops and accommodation options a full three weeks before we set off.

The planned element was balanced against the trip variables that were out of our control and would need to be navigated en route – the foreign travel element (language, culture, customs, food), the environmental element (state of the roads, traffic, weather) and most concerningly the car element (general car health and road worthiness).

With final preparations completed and the incumbent drivers on their way to Ulan-Ude for our rendezvous it was time to go.

Settled on the first flight, there was finally time to relax and allow a sense of excitement of what was to come.  The big stuff all in place.  The rest could be dealt with as the days on the road unfolded.

And then I was completely blindsided.

Checking that our next flight is on time and where we need to be.

People from the flight disappearing one by one with their bags.

A dawning sense of realisation that no new bags have appeared for several rounds.

A stubborn belief that if I watch the belt entrance hard enough my bag will magically appear.

Everything for the trip is in that bag.  This cannot be happening.  I literally have the clothes I am standing up in, a toothbrush, two pairs of contact lenses, two band aids and sunglasses to drive 4 weeks ACROSS RUSSIA…

This is the second time in two trips that EasyJet has done this – how can they be this incompetent?!

Pity party over – it’s not there and you need to keep moving.

What can I do right now?

I know the system and how long it takes to lodge a lost bag.  I need to be first in line to get this sorted!

Luton is not that big an airport and we were out early.  The bag cannot be that lost.  They fly daily – hopefully they can find it quickly so it catches me in next day or two.  It’ll work out.

Required to soothe frazzled nerves and gain perspective…  There are shops in Russia – this is not the end of the world and adventure still awaits you!

That’s the tricky thing about life and work – all the best laid plans in the world won’t stop you from getting blindsided.  I had never considered that I would be outside of my comfort zone sans luggage and be needing to expend energy on navigating the emotional and practical implications of this 15 hours away from our starting point.  I was hopeful that it would be fixed quickly and the inconvenience factor would be minimal. 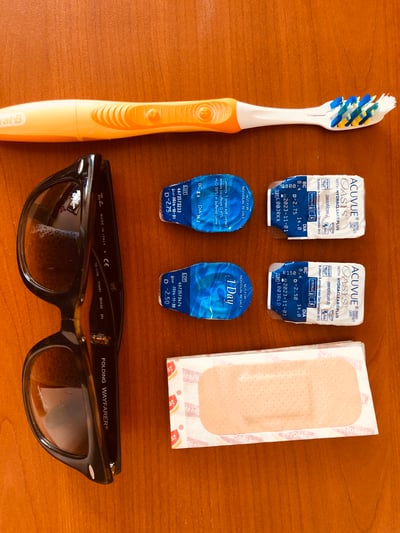 Having been in this space of uncertainty many times before and having led many people through the space during my career I could see and feel what was happening.  Thinking it was a short term blip I reset my expectations to be without luggage for a day or two.  It was inconvenient but doable.  Be reasonable, practical and stoic – it was what it was.  My friend was generous in lending me shorts and t-shirt.  I found contact lenses and clean undies.  We were in business.

There were so many other things that required complete focus and energy to deal with.  More of the unknowns – finding Russian car insurance for foreign drivers (a mission), driving a manual car again and getting out of the city successfully (with only a small brush with death), working out how to get petrol (a whole blog in itself), getting familiar with the highway traffic.  But finally we were doing it!  We were on our way!

And then….  60km’s into our first day of driving, the thing that had been my greatest concern actually happened.  The power drained out of the car and it simply stopped.  Five hours later, with the help of passing motorists and google translate, we were dropped off by our tow truck driver to the same hotel that we had set out from that morning.

Of the two – lost bag versus towed car – I would have predicted that the car would be the bigger issue to navigate.  However, with strangers willing to help us and a good mechanic to fix the alternator we were back in business 2 days later.  We could take action – we were able to focus on the things within our control to resolve the situation.

The bag however, remained very much out of my control and a routine had developed.  Up at 5:30am.  On the road at 6:00am.  Drive 12 – 13 hours.  Arrive destination.  Ring call centre.  Sit on hold.  Finally speak to someone.  No news.  Try again tomorrow.  Each day the hope of a speedy resolution seemed a little less likely but I stubbornly held onto the belief.

And then finally, one week later, Vienna airport called to say that it had been found.  Jubilation!  Together with the UK team and a reworking of our driving route, we came up with an option to reunite me with the bag.  I would soon have a choice of clean clothes at my disposal.

And in the space of 12 hours, Vienna Airport managed to lose it again and I immediately slid hard and fast back down the change curve – landing with a thump back at anger with a large topping of self-pity.

The many hours behind the wheel over the coming days allowed space to explore what on earth I was so cranky about.  If anything, I should have been liberated.  And for a few days I was.  My daily routine now took approximately 5 minutes.  I couldn’t fuss with my hair as I had no product. I didn’t need to unpack or repack my bag each day.  I was saving time and energy.

But with all of the other big unknowns to face each day, this absence of my familiar things – my few creature comforts that I was used to having for facing the world – left me feeling quite untethered.

And it was on that feeling that I pondered and hit my a-ha moment.  The bag and the contents in it were my psychological anchor.  It was the one thing that I would have day to day that was the same when I was completely shattered and everything else was either changing or unfamiliar or creating a hint of anxiety.  It would have been my constant – the contents allowing me to connect with the familiar and even offer up a sameness in routine.  It would have offered me comfort.

With this realisation, the solution was then relatively straightforward.  Firstly, I let go of the idea of being reunited with the bag and organised to have it sent back to my home when located.  And secondly, I bought a change of clothes, found an entertaining Russian shopper tote and packed a ‘new bag’ and created a small routine in the morning and evening.

It was time to get back to enjoying the adventure.

4 days to find the bag, another 3 days to tell me it was found, 1 day to lose it again in the same airport, 1 week to find it again, another week to get it back to UK.  So after 41 phone calls, hours listening to hold music and a phone bill to make your eyes water, the bag made it my home in London the day before I did – nearly 4 weeks later.